From cast iron to ceramics
During the Belgian revolution of 1830 and the period of mutiny afterwards (1830-1839) the family BOCH had already acquired a long tradition in the field of faience and a lot of strategic experience in anticipating politic and economic developments. The family build up this know-how since 1748, the year François BOCH decided to abandon his occupation of iron caster to make ceramics in Audun-le-Tiche (Lorraine), assisted by his son in law Pierre Valette and by his three sons. They decide to produce simple pieces, cheap and for the largest possible public, made from loam from Luxemburg. François Boch deceased in 1854 and the faience factory was taken over by his three youngest sons, Jean-François and Dominique, twins of 19, and Pierre-Joseph, the youngest of 17.

Birth of an international faience empire
Lorraine becomes French territory in 1765 and the three brothers obtain a double nationality, the French and the Luxemburg. Fearing the competition of the French faience factories, and with the help of the decentralisation politics of Maria Theresa of Austria, they obtain the permission, in 1766, to establish a faience factory near Luxemburg, under attractive tax conditions. The city of Luxemburg let them a plot of wasteland, but with 7 springs. The new factory is established there in 1767 under favourable workers conditions: indeed, most of the workers from Audun-le-Tiche have followed the family Boch. The factory is called « Jean-François Boch et frères » putting the name of the eldest of the three brothers in the spotlights, so he becomes the director. Dominique oversees the production techniques and Pierre-Joseph takes the lead of the production. Ten years later, in 1777, the factory occupies 100 workers, increasing to 300 in 1782.

In 1792 Pierre-Joseph becomes the only owner of Septfontaines (seven springs) since the twins don’t have any descendants. The French revolution and the occupation of Luxemburg by the French troupes transform the factory into a ruin, but Pierre-Joseph takes care of the restoration and the new start of the company, with the help of loans and of the workers who come back little by little.

Pierre-Joseph and his son Jean-François above all, were innovators. They install enormous kilns of great capacity consuming little fuel, introduce social innovations, are pioneers in using coal instead of wood, introduce printing faience… Besides, Jean-François, to stand up to the French blockade on English products, he studied chemistry and physics at the Central School in Paris, develops fabrication methods to make lead and cobalt oxides.

In 1806, Jean-François marries Anne Marie Rosalie Buschman, daughter of a rich Ardennes tanner. In 1809 he buys old constructions, besides in a bad condition, from the Benedictine abbey in Mettlach at the Saar to install a faience factory, but he has to wait till 1812 to obtain the necessary authorisations.

The Congress of Vienna grants the status of Grand Duchy to Luxemburg, as a personal gift to William, king of the Netherlands. Septfontaines looses the markets in the Netherlands and in France, due to the severe customs duties.

Pierre-Joseph Boch deceases in 1818. His son Jean-François and his brother-in-law Bonaventure Dutreux (deceased in 1829) share the property in Septfontaines. In 1829, Jean-François takes up his quarters in Septfontaines, and assigns the direction of Mettlach to his oldest son Eugène (Eugen).

Beside it, Nicolas Villeroy, at the age of 21, in 1791, had established an earthenware factory in Vaudrange on the river Saar (now called Wallerfangen) much as the one in Septfontaines, for serial production. The factories of Boch and Villeroy produce side by side till 1836, year of the conclusion of the treaty leading to the creation of the firm Villeroy and Boch.

Jean-François has reached the summit of his industrial strength. He is one of the most important shareholders of the business enterprise “Villeroy and Boch”, formed in 1836 after the merge of the faience factories in Vaudrevange, property of Nicolas Villeroy, and the enterprise Jean-François Boch and company. In consequence he becomes administrator of the faience factories in Mettlach and Vaudrevange on the Saar, he directs the factories in Eich, Echternach and Septfontaines and he remains the owner of Audun-le-Tiche in the Duchy of Lorraine. Two years later, this enterprise cooperates with the “Société d’Industrie Luxembourgeoise” (Luxemburg’s Industrial Society), important holding that will take over the faience factories of Eich and Echternach. Beside it, Jean-François Boch, Nicolas Villeroy and a third partner, Auguste Jaunez, are the lenders for the establishment of a new business enterprise “Paul Utzschneider & Cie”, in 1838. This permits the porcelain factory in Sarreguemines to continue its rise. Interesting detail, his son Eugène has married Octavie Villeroy and his daughter Wilhemina has married Jean-Baptiste Nothomb, born in Luxemburg, but one of the most active persons in the founding of the independent Belgium (JECK, 2009).

Birth of an Belgian branch of the faience empire
One negative point however: the Belgian revolution in 1830 and its consequences. In those days the future of the Luxemburg faience factory, directed by Jean-François Boch, seemed somehow jeopardized. The Belgian-Holland Treaty of XXIV articles that William, King of the Netherlands, finally accepted to sign, actually separated the Grand Duchy of Luxemburg from Belgium. With the acceptance of this Treaty of London (XXIV articles) in 1839 and the predictable adhesion of Luxemburg to the customs union (Zollverein) the Prussians had established in 1834, Septfontaines would probably loose the Belgian market (William II, his son, in his capacity of Grand Duke, did indeed join the Zollverein in 1842, the Prussian customs union).

So Jean-François BOCH searched a way to supply the Belgian market with faience plates and dishes in the best possible circumstances. On May 17th, 184l, his son Eugène acquires in a public sale a pottery situated in the territory of the town Saint-Vaast in Hainaut. Amongst others, his choice was influenced by the presence of ore deposits, mine shafts containing excellent coal, poor in fat, situated near the canal of Charleroi and a nearby railway. In March 1841 the surrounding lands were bought from the firm “Société des Charbonnages de Sars Longchamp et Bouvy”. The factory that was build under the direction of Victor Boch will be named « Keramis », maybe as a tribute to the Athens potters and for honouring the original potteries in Greece. In 1844 a general partnership is established with the name “BOCH Frères”. The three founders are Eugène BOCH, his younger brother Victor and their brother in law Jean-Baptiste NOTHOMB. The general partnership will supervise different entities: besides BOCH Frères also Septfontaines till 1855, rejected that year to become VILLEROY & BOCH, and from 1851 till 1891 the factory BOCH bought in Tournai.

However, it is only on September 30th in 1844 that the general partnership « Boch Frères » is established before a Brussels notary, but with retrospective effect since August 1st 1841.

BOCH Frères starts the production in August 1844 under the direction of Victor BOCH who stays in charge until 1881. Charles TOCK, engineer, former student of the “Ecole centrale de Paris” (Central School of Paris), replaces him till 1904 and then Marcel TOCK takes over.

The advantageous geographic situation we explained before leads to a successful start for the faience factory: a solid reputation is created thanks to royal visits and numerous medals in international exhibitions (we only mention those from the first period 1844-1870: Brussels 1847, Paris 1855, London 1862, Porto 1865, Paris 1867 and Amsterdam 1869). The factory employs 250 workers in 1893, almost a thousand in 1900 and 1350 in 1936 (catalogue from 1936). Based on the model of the paternalism and corporatism, the factory hires skilled foreign workers and local workers to train, and creates close relationships with them through social services and the creation of institutes and patronages (small workers houses, a school, a pension fund,…). The industrial development of the municipality results in the independence of the part of St. Vaast where the factory is established, named La Louvière in 1869, the other part of the municipality preserves the original name St. Vaast.

In the course of its history the factory changes the brand name, among others in 1948, year of the change into a public limited company to anticipate the evolutions in the market and becomes “Boch Frères S.A.” (Boch brothers plc). In 1949 a sanitary division is created. After a period of growth from 1955 until 1965 and with the development of the sanitary division, the board of directors decides in 1970 to build a new factory, but the new factory is only finished in 1972, and that is too late to get one’s share of the flourishing market in the sixties. In 1974 the result of the division “plates and dishes” is negative, and the company knows a slow descending trend, in despite of the reorganisations and the financial interventions of the public services. In 1985 Boch Frères S.A. is liquidated and the activities are split up. 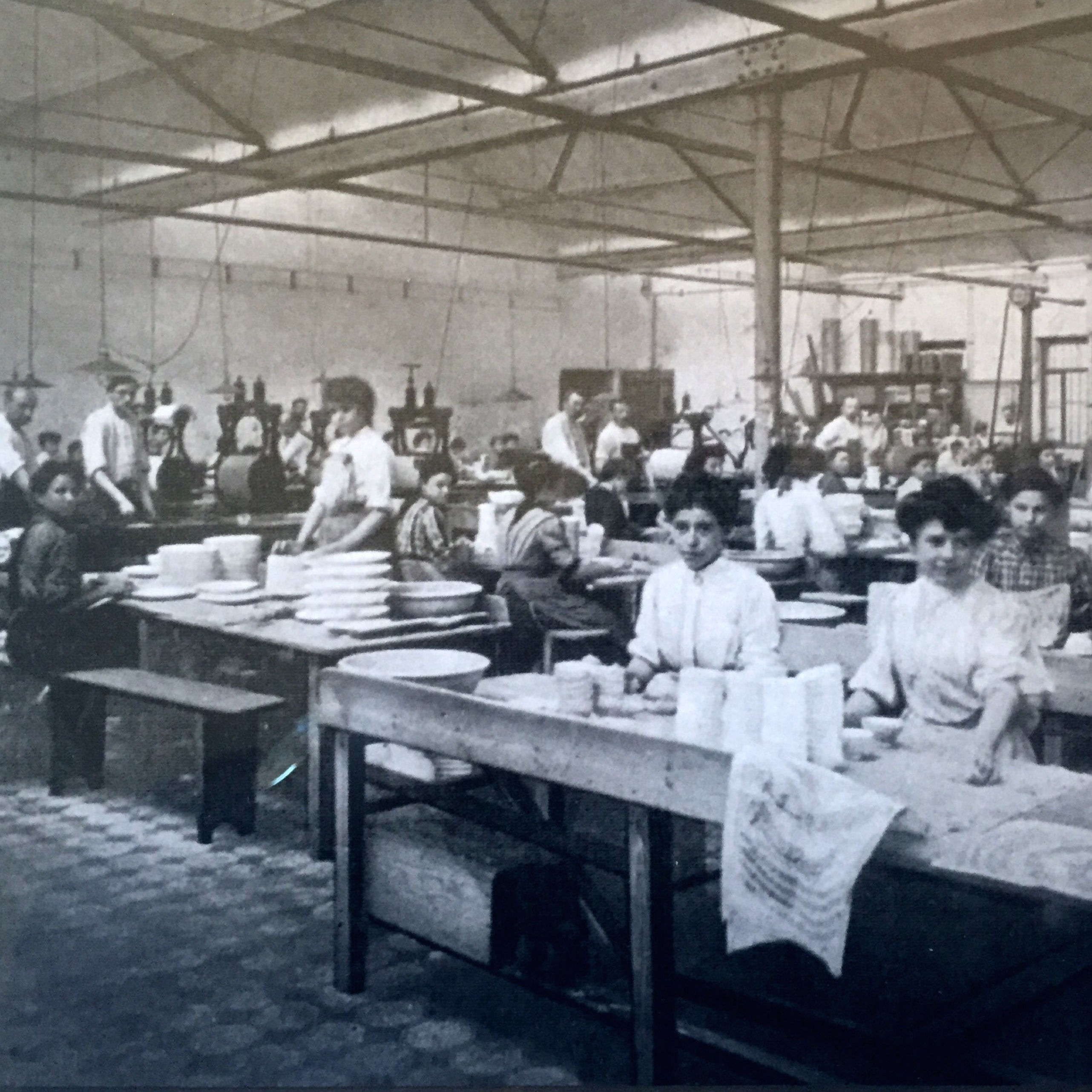 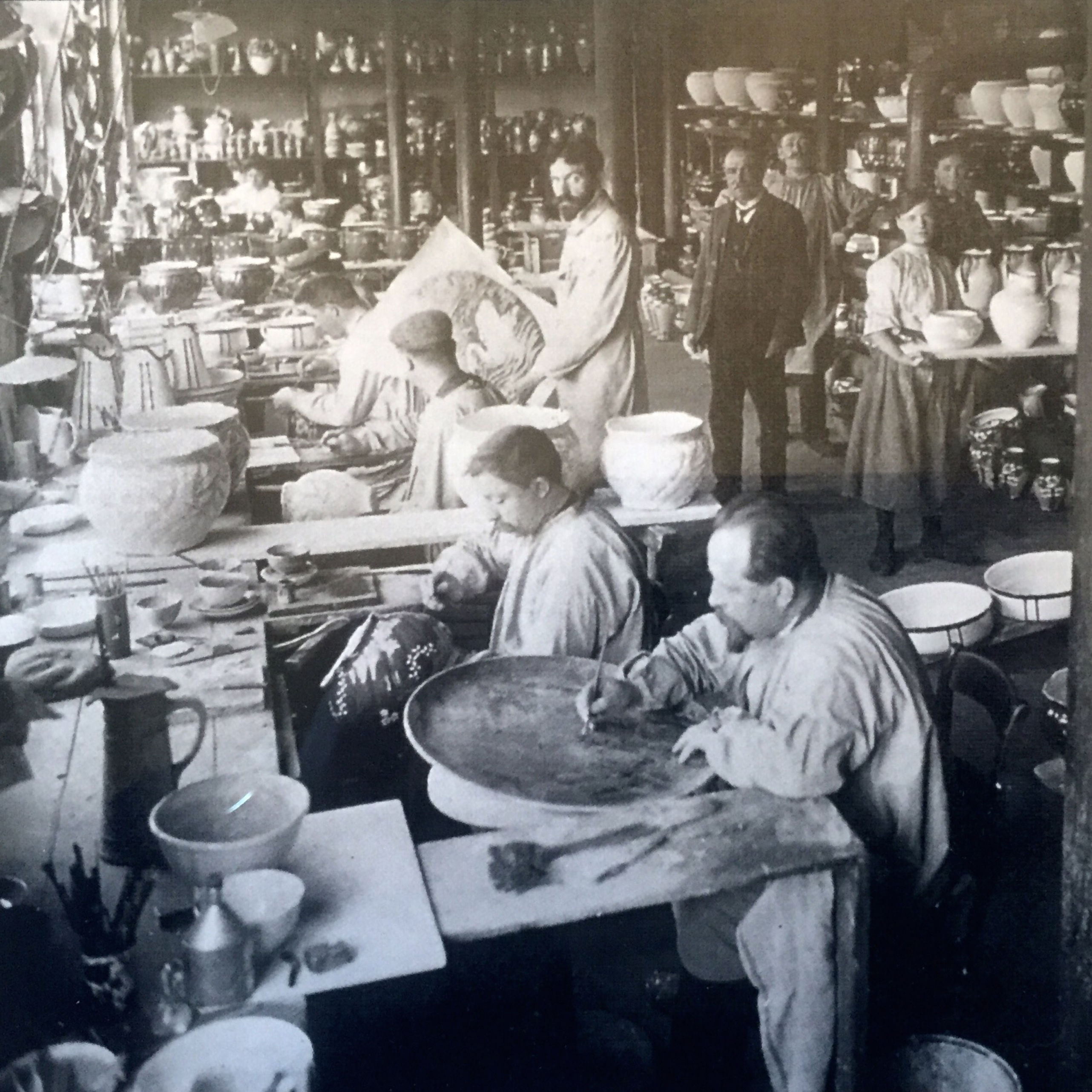 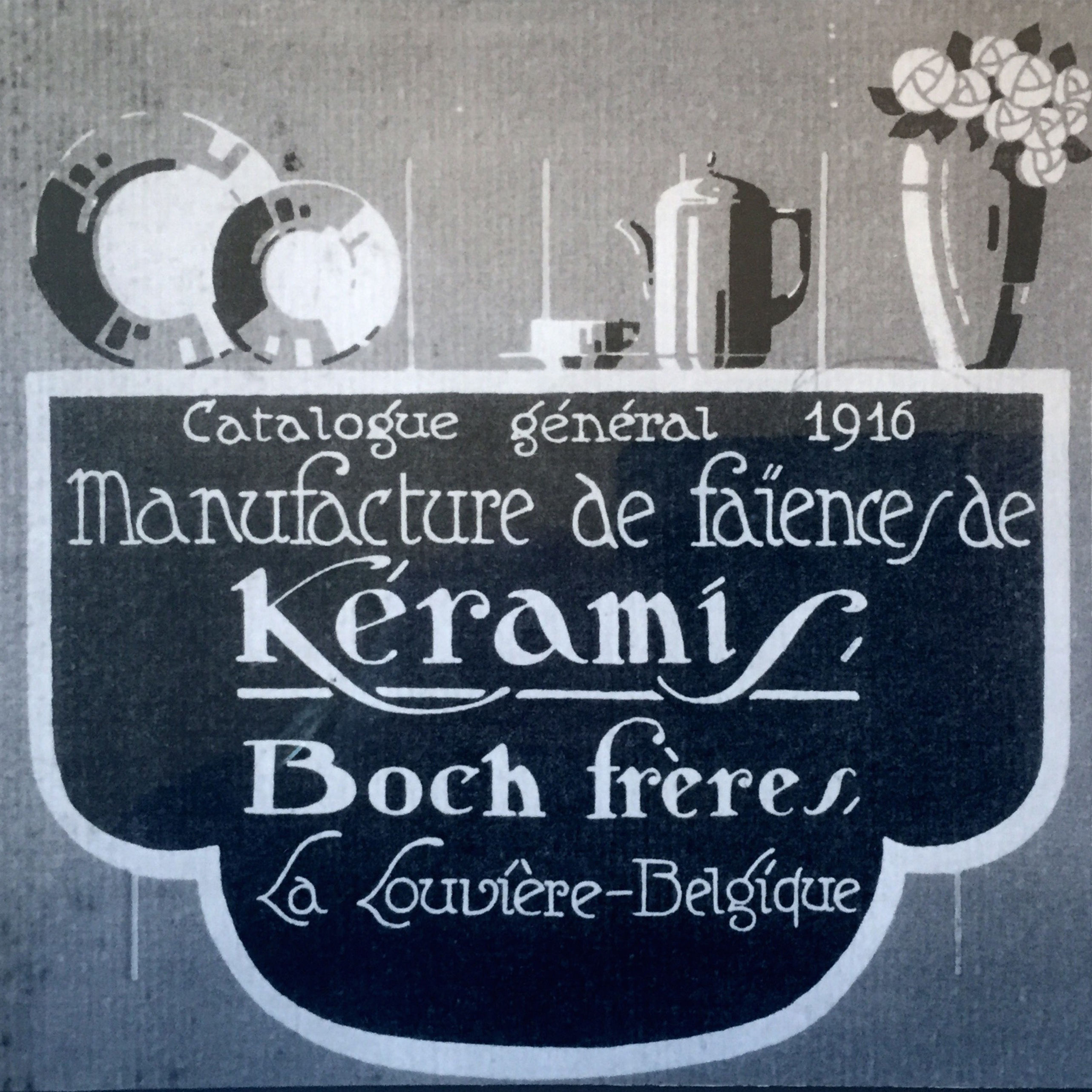 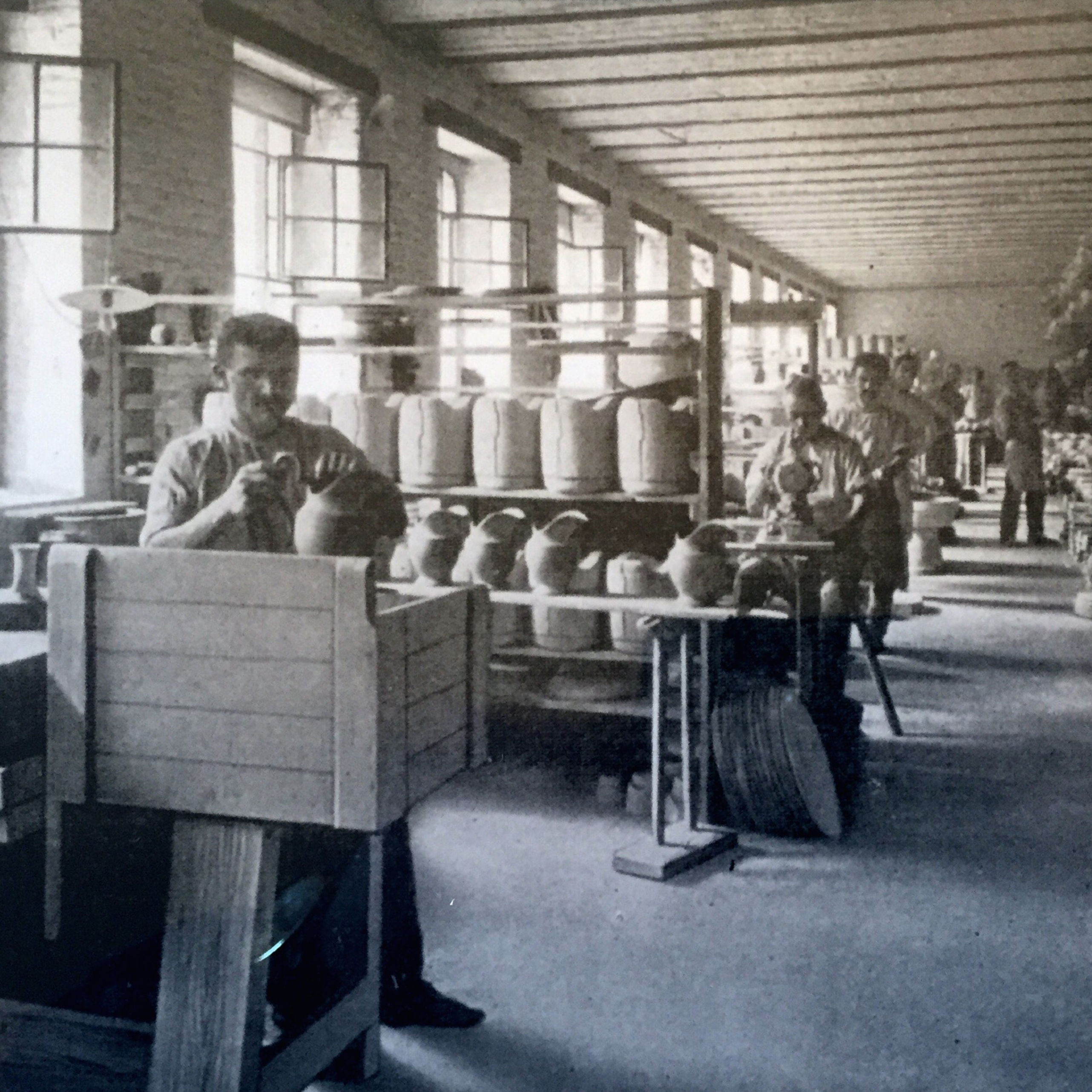 Birth of Royal Boch
The “Manufacture Royale La Louvière Boch”, abbreviated M.R.L.Boch, which takes over the production of tableware from Boch Frères, goes bankrupt in 1988. The group Le Hodey takes over the company in 1989 under the name Royal Boch Manufacture S.A. Due to cumulated losses, the group sells her shares and the tandem de Mevius-de Spoelberch acquires the direction of the company.

Besides M.R.L.Boch the Walloon Region establishes a second company that takes over the sanitary production, activity that passes to the Netherland group Koninklijke Sphinx (Royal Sphinx) in 1991, and merges afterwards, in 1998, into the group Sphinx-Gustavberg.

On Thursday February 26th 2009 the commercial court of Mons gives judgment on the bankruptcy of the “Manufacture Royal Boch de La Louvière”. But the 47 workers decide to occupy the factory. The last hope is a meeting of the designated curator with a candidate transferee.